Canson, expert in the market of fine art and LFP papers, and LaserSoft Imaging, globally leading developer of scanner and digital imaging software, agreed on working more closely from now on. The joint adjustment of paper and software results in perfect printing possibilities without having to concern oneself with complicated printer driver settings. PrinTao 8 has all Canson Infinity paper profiles already preinstalled, thus ensuring optimum prints.

Do you too have already planned on scanning your analog slide and photo collection a number of times? You want to know your memories safe? Now is the time to finally build a digital archive to protect your valuable images from loss, damage or deterioration.

The SilverFast Archive Suite 8 provides amazing new features and allows to build up a high-quality archive in no time following its unique non-destructive workflow.

With SilverFast's Archive Suite 8 you get a package of scanner software SilverFast Ai Studio 8 and image processing software SilverFast HDR Studio 8 as a perfectly adjusted supplement. Including an integrated color management system, this ideal archiving package is now available for your scanner. The VLT as the new Virtual Light Table represents the ideal link between scanner and digital imaging software. We grant a 20% introductory discount on any SilverFast Archive Suite 8 purchase until end of June, 2014. This reduced price also applies to upgrades but is not combinable with other discounts.

As an entry-level version SilverFast SE 8 offers outstanding scan results and easy handling. Users benefit from a variety of automatic functions, which make the scan and image optimization process easier, while a consistently high quality can be guaranteed.

Heartbeat of Nature – Images of nature that touch the heart. That's the slogan for an international photo contest organized by German photo festival Zingst and Photokina trade fair. The main prize is a Volkswagen up! Of course, LaserSoft Imaging provides some valuable SilverFast software packages for the contest as well.

(click to enlarge)
Entering the competition is easy: Just choose three remarkable photos impressively showing the beauty and diversity of nature. Upload them on the contest website. On commonly expressed wish, the participation fee of five Euros per participant will be used, to produce an exhibition catalog including the top 100 images.

Enter the contest before June 15th and upload your images. The award ceremony takes place on German photo trade fair Photokina, September 20th. « We are looking for strong emotional motifs – images of nature that touch the heart – focused on the topical issue of species diversity. »

More infos regarding the contest within this PDF or on www.heartbeatofnature.com.

SilverFast 8 now supports more versions of Photoshop –  With version 8.0.1r43 SilverFast 8 now also offers direct connection to Photoshop Elements 11 and 12. With an earlier version, also Photoshop CC has been connected recently. With this option, it is possible to import images directly from your scanner into Photoshop. SilverFast 8 ensures optimal basis data for any further image processing.
top
7. April 2014

MacUser: « SilverFast Archive Suite 8 is undeniably expensive, but it’s an effective professional scanning app, with excellent colour and contrast correction tools. It could still be more intuitive to use, but the WorkflowPilot goes some way towards easing scan setups. »

You can find the complete review here as a PDF file.

Testimonial: Walt Cecil – ETHNOGRAPHICA – Walt Cecil, specialist for antique oriental carpets, has used SilverFast software for many years. He is really enthusiastic about his upgrade to version 8 and PrinTao 8.

(click to enlarge)
Walt Cecil: « Consequently I have spent many thousands on equipment, ink and paper only to be bewildered and confused by how this is all supposed to work together and often ending up with prints that were only good enough to be trashed.

That all changed when I decided to upgrade my very old version of SilverFast 6 to the new release 8 and add HDR 8. […] »

Fund-raising for the Philippines – As part of our fund-raising campaign in December 2013, our customers have helped diligently. An amount of € 2,- for every sold SilverFast full version during donation period now goes to the UNICEF fund-raiser. LaserSoft Imaging AG increases the donation amount and we are happy to be able to forward more than € 3.500 to the typhoon victims in the Philippines.

With the donations UNICEF received up to date, some important objectives already have been realized:
All information about UNICEF fund-raiser and the current situation in the Philippines.

LaserSoft Imaging will be back at the CeBIT for you. We are presenting interesting digital imaging, scanning and printing news hand in hand with our partners Epson and Plustek. We would be happy to arrange meetings with press, partners, resellers or customers. Please contact us at cebit2014@silverfast.com. 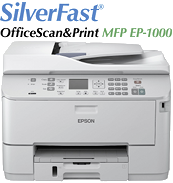 Epson – Featuring the OfficeScan&Print MFP EP-1000, we would like to introduce for the first time at CeBIT a solution for government agencies, which can be fully integrated into the German DIGANT® III nPA process for passport and ID card issuing. The OfficeScan&Print consists of an Epson multifunction device and a specially adjusted SilverFast software. A flexible license management via license server now allows to share the OfficeScan&Print in a local network.

Visit us at Epson's stand in hall 7, booth A63 (Public Sector Parc) and see life this combination of powerful hardware and high-end scanner software SilverFast including IT8 color calibration and an ID printing solution. The OfficeScan&Print fulfills all requirements German federal printing agency Bundesdruckerei calls for a governmental usage.

Plustek – We would like to invite you to visit hall 3, booth F29 to learn more about SilverFast 8 and medium format scanner Plustek OpticFilm OF120.

The OpticFilm 120 scanner comes with SilverFast 8, the latest version of our scanning software. The novel user interface and the unique WorkflowPilot assistant enable you to digitize slides and negatives as comfortable and easy as never before.

Frontal Lobbings – Canadian photographer Terrance Lam has reviewed the new Plustek OpticFilm 8200i and SilverFast SE Plus 8 for the well known website Frontal Lobbings. Mr. Lam with more than 25 years experience in creative arts also leads applied arts education at the Pacific Design Academy. In his review he highlights the NegaFix option, which gives the user a convenient and professional way to convert negatives into brilliant positives. Lam is really satisfied with SilverFast and prefers it over all other scanner tools.

Terrance Lam: « The Plustek is a mini scanning lab on your desktop at a value. […] I will say that with a small learning curve with SilverFast, that you'll be scanning awesome negs in no time.

… I'd still suggest spending the time with SilverFast over Vuescan and in terms of colour negs, SilverFast deals with the orange mask far better than any other software scanning combination out there. »

You can find the complete article on the frontallobbings.com website.

Moderskeppet.se – 3,5 Hours of Swedish Video Course
Scanning different Image Material using SilverFast 8 Moderskeppet: « Scanning the family's old photo treasure can really tax someone‘s patience. Therefore it would be nice to do everything correctly the first time without risking of having to re-scan everything. Scanning expert Gustaf Hellsing can give you this guaranty – whether you want to scan photos, negatives, slides or everything mixed. » 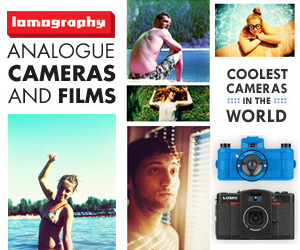 Lomography: If your passion is to scan your own film, you probably know how it feels to spend a long night scanning and retouching photos. So in conjunction with LaserSoft Imaging, we want to see how your face looks like after those long hours you spent in front of the scanner, and reward you for all your effort. We are confident that, despite the fatigue after such a laborious task, the happiness will show in your face.

Please visit Lomography's current contest "Show us your face after an long night of scanning" to see if you can win SilverFast products.

More information on the contest on www.Lomography.com.